An operating system is an interface between user and hardware of a system and it controls allocation of resources and its retrieval.

The major functions of operating systems are 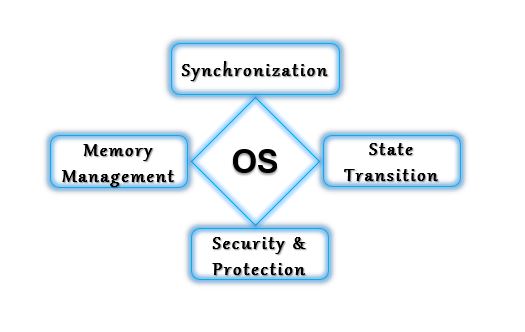 The main objectives of an operating systems to, to provide convenient interface to its users and it should be efficient to process complex scientific data.

The fundamental operations of an OS can be described as follows:

What ever you do on your system is a process. Let us say your sending a request to your printer from a word document when your printer is already on duty with some other work, if the OS takes you command directly you will get a mixed-bad printout.

So in order to avoid this OS implements different techniques, which are called Synchronization Mechanism in OS to avoid clashes between resources( example: printer, files other external hardware... ) and tasks called processes.

Playing music in background along with reading article on browser- you are giving multiple works to your system at same time.

Each process running on your system might have to through lot of states, like waiting on main memory(RAM) for its turn, getting executed at processor, sometime again get back to main or secondary(HDD) memory…

All these transition of processes and handling of multiple processes from its creation to termination id controlled by OS.

Hard disk is somewhat slower memory than, main memory(RAM). For faster execution you have to load programs from HDD to RAM then execution then on processor one by one.

You might had seen HDD of 1 TB, 2 TB spaces because you have that much larger programs/ resources, but RAM of 1 GB or 4 GB...

Which means you cannot load the entire HDD into RAM, where ever your current execution had reached and what ever be the programs required for upcoming processes that only will get loaded to main memory. For that also you need a better memory manager called Operating System.

Besides simply managing the memory all CRUD( Create,Read, Update & Delete) is also under control of Operating system.


The sequential scheduling of processes in this method, neglects the priority of the processes, hence starvation(effect of larger response time) will be larger with reference to other types of operating systems.


Strategy of temporary suspension of a process from execution is called preemption.


Throughput is the amount of works completed in a system over a period of time.


The Real Time OS is an operating system which processes the jobs in real time within smaller deadline. Usually used in areas of highly precise computation and faster processing is required.

February 01, 2019
While printing your document opened in Adobe Acrobat Reader, if you gave a same command for document opened in Microsoft Word! How will it be?These are the real time situations where two processes competing together for same resources due to improper process synchronization. An unstructured access approval to these resources may lead to a abnormal output or a breach in information security or even it may cause for data loss. In the above case which might be a bunch of over-written papers coming out of the printer connected to that system.

Shared Memory and Critical Section Resources or memory spaces where different processes have access to read, write or update at same time are known as shared memory.And the piece of program which tries to access the shared memory is known as Critical Section. There are situations where an operating system need to handle multiple request from critical sections of various processes in a machine, in order to maintain data consistency in resources …
Post a comment
Next »