Automata are decision making machines, which decides whether a string belongs to a language or not.

An automaton is called deterministic, when it shows a unique path for change of state on every input.

Automata with definite number of states are called finite automata.

A Deterministic finite automaton(DFA) has both qualities,ie. it is deterministic and has finite number of states

So if we are constructing an DFA which accepts all odd binary numbers,

our deterministic finite machine will have two states odd and even.

Our machine requires inputs, the elemental binary numbers, i.e 0 or 1

When you feed this a DFA with a inputs from MSB(Most Significant Bit) to LSB of a binary, when the zero comes as input the state has to be even when one the input the state will be odd. 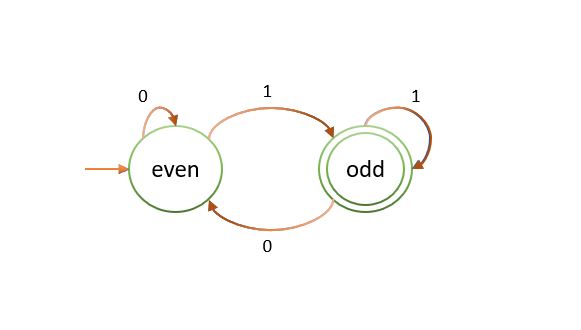 Here the odd state is called finial state, where After giving LSB of the input to the machine, if the state is odd, concludes that the binary belong to language of set all odd binary numbers.

And the state transition can be represent in terms of function δ : Q x Σ ➡ Q

The state transition function describes what should be the next state when a symbol input is given to a state.

So, a DFA has mainly the following parameters :

December 16, 2018
Hard disk drive of the system in called primary memory and secondary memory is Random Access Memory(RAM). Either a program written in High Level Language(HLL) or a executable code generated by the sequence of works done by pre-processor, compiler and assembler, resides in secondary memory of the system. To start an execution, operating system allocates some space in the main memory, for the program to be executed and loads the program in the secondary memory to the allocated space. The piece of work which is loaded by the operating system to the main memory in order to execute program is called processEvery program loaded by operating system will create a focus boundary(or process body), a partitioned memory area where all memory requirements for the execution of program is satisfied.Variable which will not change its value through out life time of process is called static variable and variables which are globally accessible in a process known as global variable.Heap area is reserved f…
Post a comment
Next »